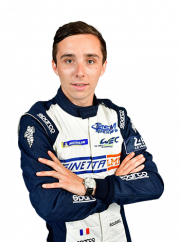 Inter Europol Competition has finalised its driver line-up for the 87th running of the 24 Hours of Le Mans on 15-16 June. The Polish team is set to field in the LMP2 class a Ligier JS P217-Gibson to be shared by Polish driver Kuba Smiechowski, Frenchman Léo Roussel and Brit Nigel Moore.

Inter Europol Competition has announced a new addition to its line-up – Léo Roussel. The French driver will join the Polish team for the European Le Mans Series and the 87th Le Mans 24 Hours (15-16 June).

One of the changes affecting the upcoming 86th edition of the 24 Hours of Le Mans include the newly modified Porsche Curves. Though nothing has been done to the track itself, work has been completed to put in place a larger clearance area, new fencing and brand new guardrails.

Chinese team Manor, now called CEFC TRSM Racing, is moving up to the LMP1 class for the 2018-2019 Super Season of the World Endurance Championship (FIA WEC). On the heels of yesterday's announcement that Alex Brundle will share the #6 Ginetta G60-LT-P1 with Oliver Rowland, the names of two drivers for the #5 sister ...