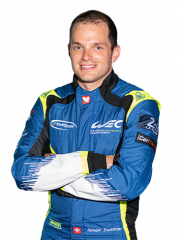 The liveries of the Oreca 07s fielded by Panis Racing and PR1 Motorsports Mathiasen were unveiled as scrutineering took place. They have been designed by Laurent Minguet, an artist with a devotion for the 24 Hours of Le Mans

After two seasons in LM P1, Swiss driver Simon Trummer will switch to the LM P2 class in 2017 at the wheel of one of CEFC Manor TRS Racing's two Oreca 07s in all of the World Endurance Championship (WEC) rounds, including the 24 Hours of Le Mans.